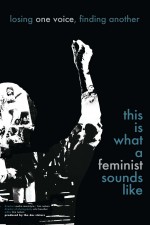 Pat Noonan has been called all of these things. They are all true.

This is What a Feminist Sounds Like is the story of 80 year old social activist Pat Noonan and it is a guided tour of the burgeoning of woman’s rights and gender equality in North America during the twentieth century, set in the small automotive town of Windsor, Ontario. Pat’s story is a stirring example of how a way of life that revolves around strong and generous dedication to others can be the model for an incredibly inspiring and kick-ass way to live.

There was certainly never a dull moment working with Pat day in and day out in the summer of 2011. Our film crew learned the life story of an inspiring person who has proven that grassroots activism can ripple its way up to the federal level. Her sense of humour and wonder will baffle the audience. And most importantly, she believes in and brings out the very best in the members of her community. Between interviews, Pat was probing the film crew, asking each of us about our life’s passions and cheering us on. We eventually learned that this characteristic played a fundamental role in uplifting not only those in her circle but Pat herself, too. Thank you, Pat, for making us a part of your “vicious cycle”!

Pat is a courageous, charismatic and empathetic person who is inspiring to be around. Her views and actions bring up important and challenging questions about how we live in the world, what we care about, and crucially, what we are willing to do about it. In the film, a woman who worked with Pat in social activist theatre in the 1980s says, “I want to be Pat Noonan when I grow up,” and I do too.