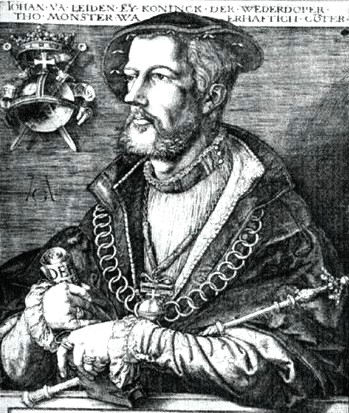 Jan van Leiden is one of the characters chronicled in "Hardcore History's" episode "The Prophets of Doom." Photo courtesy of Wikimedia Commons

When I say “live documentary,” the most common response is, “like that This American Life thing?” This American Life presented a live show at BAM and it is pretty much what you would expect to see as the theatrical manifestation of Ira Glass. It’s an ebullient spectacle that includes song and dance. It makes sense that podcasters would take to the stage, as a medium born in the age of transmedia. Podcasters don’t need to stay behind the curtain in iTunes or on Soundcloud. But what I want to talk about today isn’t the live doc angle but how to do documentary history. Enter Dan Carlin’s Hardcore History.

Hardcore History is one of the most compelling podcasts I listen to. Wikipedia calls Dan Carlin’s style “Theater of the Mind.” That’s apt. The first episode I heard was Prophets of Doom. I loved this 4 hour + walk through the madness that was the Anabaptist cataclysm in Münster in the early 16th century. He refers to the chaos that ensues as a perfect HBO plot reminding the listeners about our place in history and how we are interpreting it. And I would be surprised if a Game of Thrones style mini-series about this debacle was not already in the works, inspired by the audacity of what happened, and especially by Carlin’s framing of it. Hardcore History shows us how to embrace history, in our post-modern era, post-historiography and post-Hayden White.

As you’d guess some historians take umbrage at this podcast and its popularity and populism. I know some historians have been supportive while others criticize Carlin for not contextualizing the whole “historical mission” thing more. Here’s a link to one such critique that lays that argument out well. It’s engaging, balanced and a thorough but readable list of a historian’s concerns, but also in the end, I think, overly critical.

The core complaint this historian expresses is that Hardcore History does do enough to foreground that tension between recounting events and backing away from those events, prefacing it all with the fact that we don’t/can’t really know what happened or why. The professor himself acknowledges that for many, including students, that kind of doctrinaire equivocation can be (I’m paraphrasing here) a bit of a buzz kill. And that’s just the problem. When reaching out to larger audiences there is a line between telling the story and contextualizing it into near oblivion. I think Carlin walks that line well. He contextualizes, quotes sources and references historians. He describes the past in an expressive and compelling way, while suggesting alternate interpretations, vagueness in the record, and his own position as the interpreter in this version. In this way, he goes a long way to introducing doubt and context into the enterprise of history and that is commendable. The effect is a complex and vivid time travel device and Dan Carlin is surely a great man of history.